Essential knowledge 4.A.1: The subcomponents of biological molecules and their sequence determine the properties of that molecule. 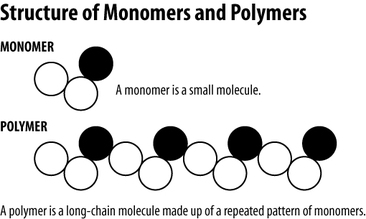 a. Structure and function of polymers are derived from the way their monomers are assembled.

1. In nucleic acids, biological information is encoded in sequences of nucleotide monomers. Each nucleotide has structural components: a five-carbon sugar (deoxyribose or ribose), a phosphate and a nitrogen base (adenine, thymine, guanine, cytosine or uracil). DNA and RNA differ in function and differ slightly in structure, and these structural differences account for the differing functions.

2. In proteins, the specific order of amino acids in a polypeptide (primary structure) interacts with the environment to determine the overall shape of the protein, which also involves secondary tertiary and quaternary structure and, thus, its function. The R group of an amino acid can be categorized by chemical properties (hydrophobic, hydrophilic and ionic), and the interactions of these R groups determine structure and function of that region of the protein.

3. In general, lipids are nonpolar; however, phospholipids exhibit structural properties, with polar regions that interact with other polar molecules such as water, and with nonpolar regions where differences in saturation determine the structure and function of lipids.

4. Carbohydrates are composed of sugar monomers whose structures and bonding with each other by dehydration synthesis determine the properties and functions of the molecules. Illustrative examples include: cellulose versus starch.

b. Directionality influences structure and function of the polymer.
1. Nucleic acids have ends, defined by the 3' and 5' carbons of the sugar in the nucleotide, that determine the direction in which complementary nucleotides are added during DNA synthesis and the direction in which transcription occurs (from 5' to 3').
2. Proteins have an amino (NH2) end and a carboxyl (COOH) end, and consist of a linear sequence of amino acids connected by the formation of peptide bonds by dehydration synthesis between the amino and carboxyl groups of adjacent monomers.
3. The nature of the bonding between carbohydrate subunits determines their relative orientation in the carbohydrate, which then determines the secondary structure of the carbohydrate. 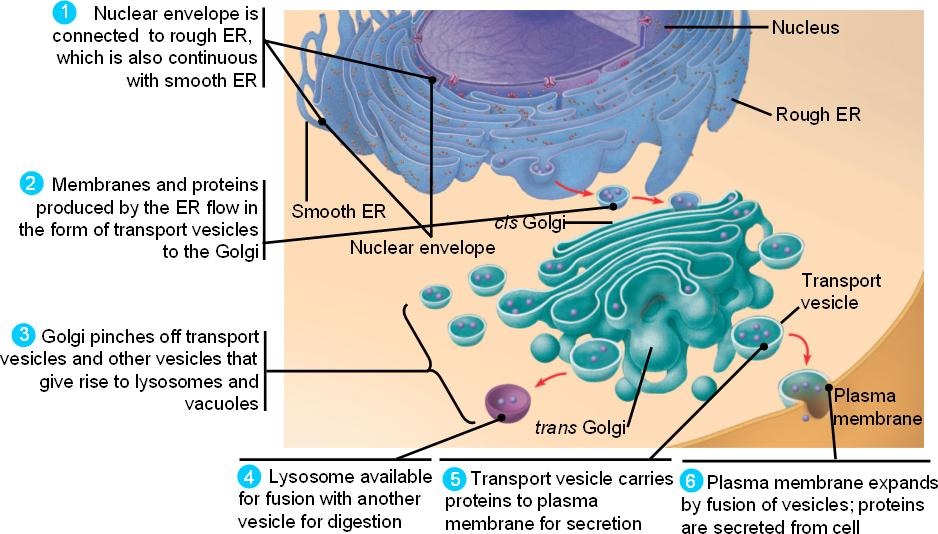 a. Ribosomes are small, universal structures comprised of two interacting parts: ribosomal RNA and protein. In a sequential manner, these cellular components interact to become the site of protein synthesis where the translation of the genetic instructions yields specific polypeptides.


c. The Golgi complex is a membrane-bound structure that consists of a series of flattened membrane sacs (cisternae).

f. A vacuole is a membrane-bound sac that plays roles in intracellular digestion and the release of cellular waste products. In plants, a large vacuole serves many functions, from storage of pigments or poisonous substances to a role in cell growth. In addition, a large central vacuole allows for a large surface area to volume ratio.

g. Chloroplasts are specialized organelles found in algae and higher plants that capture energy through photosynthesis.

Essential knowledge 4.A.3: Interactions between external stimuli and regulated gene expression result in specialization of cells, tissues and organs.

a. Differentiation in development is due to external and internal cues that trigger gene regulation by proteins that bind to DNA. [See also 3.B.1, 3. B.2]

b. Structural and functional divergence of cells in development is due to expression of genes specific to a particular tissue or organ type. [See also 3.B.1, 3.B.2]

c. Environmental stimuli can affect gene expression in a mature cell. [See also 3.B.1, 3.B.2]

Essential knowledge 4.A.4: Organisms exhibit complex properties due to interactions between their constituent parts. 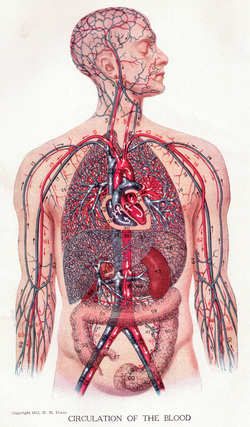 Interactions and coordination between organs provide essential biological activities.
To foster student understanding of this concept, instructors can choose an illustrative example such as:
• Stomach and small intestines
• Kidney and bladder
• Root, stem and leaf

• Respiratory and circulatory
• Nervous and muscular
• Plant vascular and leaf

Essential knowledge 4.A.5: Communities are composed of populations of organisms that interact in complex ways.

The structure of a community is measured and described in terms of species composition and species diversity.
Mathematical or computer models are used to illustrate and investigate population interactions within and environmental impacts on a community. [See also 3.E.1]

Mathematical models and graphical representations are used to illustrate population growth patterns and interactions.
Evidence of student learning is a demonstrated understanding of each of the following:
1. Reproduction without constraints results in the exponential growth of a population.
2. A population can produce a density of individuals that exceeds the system’s resource availability.
3. As limits to growth due to density-dependent and density- independent factors are imposed, a logistic growth model generally ensues.
4. Demographics data with respect to age distributions and fecundity can be used to study human populations.

Essential knowledge 4.A.6: Interactions among living systems and with their environment result in the movement of matter and energy.

a. Energy flows, but matter is recycled. [See also 2.A.1] b. Changes in regional and global climates and in atmospheric

e. Models allow the prediction of the impact of change in biotic and abiotic factors.Evidence of student learning is a demonstrated understanding of each of the following:
1. Competition for resources and other factors limits growth and can be described by the logistic model.

Evidence of student learning is a demonstrated understanding of each of the following:

1. As human populations have increased in numbers, their impact on habitats for other species have been magnified.

2. In turn, this has often reduced the population size of the affected species and resulted in habitat destruction and, in some cases, the extinction of species.

g. Many adaptations of organisms are related to obtaining and using energy and matter in a particular environment.