Essential knowledge 3.A.1: DNA, and in some cases RNA, is the primary source of heritable information. 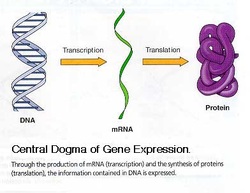 4. The proof that DNA is the carrier of genetic information involved a number of important historical experiments. These include:
i. Contributions of Watson, Crick, Wilkins, and Franklin on the structure of DNA
ii. Avery-MacLeod-McCarty experiments
iii. Hershey-Chase experiment

5. DNA replication ensures continuity of hereditary information.
i. Replication is a semiconservative process; that is, one strand serves as the template for a new, complementary strand.
ii. Replication requires DNA polymerase plus many other essential cellular enzymes, occurs bidirectionally, and differs in the production of the leading and lagging strands.

6. Genetic information in retroviruses is a special case and has an alternate flow of information: from RNA to DNA, made possible by reverse transcriptase, an enzyme that copies the viral RNA genome into DNA. This DNA integrates into the host genome and becomes transcribed and translated for the assembly of new viral progeny. [See also 3.C.3]

b. DNA and RNA molecules have structural similarities and differences that define function. [See also 4.A.1]
Evidence of student learning is a demonstrated understanding of each of the following:
1. Both have three components — sugar, phosphate and a nitrogenous base — which form nucleotide units that are connected by covalent bonds to form a linear molecule with 3' and 5' ends, with the nitrogenous bases perpendicular to the sugar-phosphate backbone.

4. The sequence of the RNA bases, together with the structure of the RNA molecule, determines RNA function.
i. mRNA carries information from the DNA to the ribosome.
ii. tRNA molecules bind specific amino acids and allow information in the mRNA to be translated to a linear peptide sequence.
iii. rRNA molecules are functional building blocks of ribosomes.
iv. The role of RNAi includes regulation of gene expression at the level of mRNA transcription.

c. Genetic information flows from a sequence of nucleotides in a gene to a sequence of amino acids in a protein.
Evidence of student learning is a demonstrated understanding of each of the following:
To foster student understanding of this concept, instructors can choose an illustrative example such as:
•Addition of a GTP cap
•Addition of a poly-A tail
•Excision of introns

3. Translation of the mRNA occurs in the cytoplasm on the ribosome.

4. In prokaryotic organisms, transcription is coupled to translation of the message. Translation involves energy and many steps, including initiation, elongation and termination.
The salient features include:
i. The mRNA interacts with the rRNA of the ribosome to initiate translation at the (start) codon.
ii. The sequence of nucleotides on the mRNA is read in triplets called codons.
iii. Each codon encodes a specific amino acid, which can be deduced by using a genetic code chart. Many amino acids have more than one codon.
4^3 = 64 COMBINATIONS of CODONS
iv. tRNA brings the correct amino acid to the correct place on the mRNA.
v. The amino acid is transferred to the growing peptide chain.
vi. The process continues along the mRNA until a “stop” codon is reached.
vii. The process terminates by release of the newly synthesized peptide/protein.

d. Phenotypes are determined through protein activities.
To foster student understanding of this concept, instructors can choose an illustrative example such as:
• Enzymatic reactions
• Transport by proteins
• Synthesis
• Degradation

e. Genetic engineering techniques can manipulate the heritable information of DNA and, in special cases, RNA.

Essential knowledge 3.A.2: In eukaryotes, heritable information is passed to the next generation via processes that include the cell cycle and mitosis or meiosis plus fertilization. 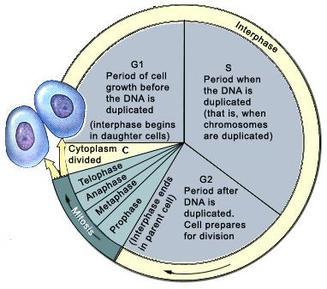 A. The cell cycle is a complex set of stages that is highly regulated with checkpoints, which determine the ultimate fate of the cell.

Evidence of student learning is a demonstrated understanding of each of the following:

2. The cell cycle is directed by internal controls or checkpoints. Internal and external signals provide stop-and-go signs at the checkpoints.

4. Mitosis alternates with interphase in the cell cycle.

5. When a cell specializes, it often enters into a stage where it no longer divides, but it can reenter the cell cycle when given appropriate cues. Nondividing cells may exit the cell cycle; or hold at a particular stage in the cell cycle.

b. Mitosis passes a complete genome from the parent cell to daughter cells.
Evidence of student learning is a demonstrated understanding of each of the following:

c. Meiosis, a reduction division, followed by fertilization ensures genetic diversity in sexually reproducing organisms.
Evidence of student learning is a demonstrated understanding of each of the following:

5. Fertilization involves the fusion of two gametes, increases genetic variation in populations by providing for new combinations of genetic information in the zygote, and restores the diploid number of chromosomes. 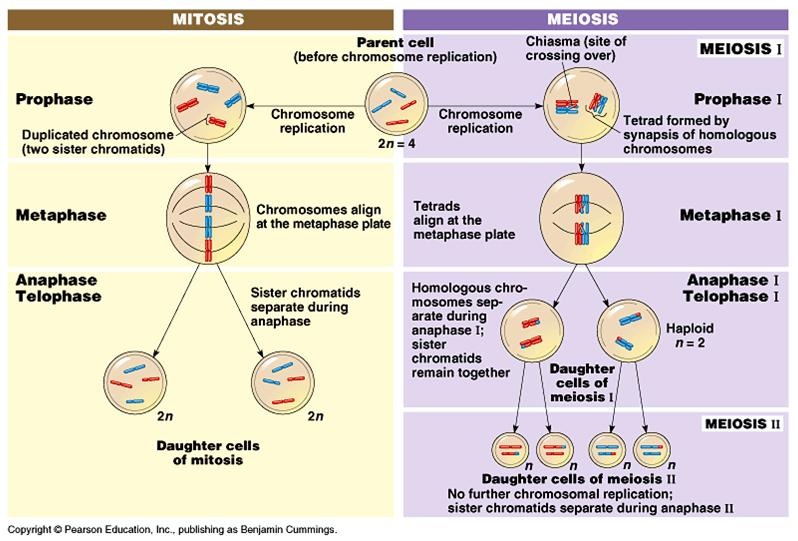 Essential knowledge 3.A.3:The chromosomal basis of inheritance provides an understanding of the pattern of passage (transmission) of genes from parent to offspring 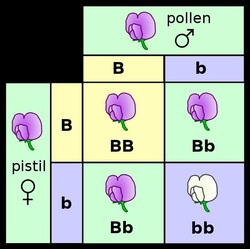 a. Rules of probability can be applied to analyze passage of single gene traits from parent to offspring.

2. Genes that are adjacent and close to each other on the same chromosome tend to move as a unit; the probability that they will segregate as a unit is a function of the distance between them.

3. The pattern of inheritance (monohybrid, dihybrid, sex-linked, and genes linked on the same homologous chromosome) can often be predicted from data that gives the parent genotype/ phenotype and/or the offspring phenotypes/genotypes.

c. Certain human genetic disorders can be attributed to the inheritance of single gene traits or specific chromosomal changes, such as nondisjunction.
To foster student understanding of this concept, instructors can choose an illustrative example such as:

Many ethical, social and medical issues surround human genetic disorders.
To foster student understanding of this concept, instructors can choose an illustrative example such as:
• Reproduction issues
• Civic issues such as ownership of genetic information, privacy, historical contexts, etc. 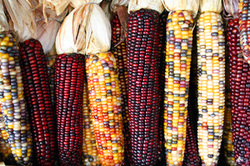 a. Many traits are the product of multiple genes and/or physiological processes.
Evidence of student learning is a demonstrated understanding of the following:
1. Patterns of inheritance of many traits do not follow ratios predicted by Mendel’s laws and can be identified by quantitative analysis, where observed phenotypic ratios statistically differ from the predicted ratios.

b. Some traits are determined by genes on sex chromosomes.
To foster student understanding of this concept, instructors can choose an illustrative example such as:
• Sex-linked genes reside on sex chromosomes (X in humans).
• In mammals and flies, the Y chromosome is very small and carries few genes.
• In mammals and flies, females are XX and males are XY; as such, X-linked recessive traits are always expressed in males.
• Some traits are sex limited, and expression depends on the sex of the individual, such as milk production in female mammals and pattern baldness in males.

c. Some traits result from nonnuclear inheritance.
Evidence of student learning is a demonstrated understanding of each of the following: